This comprehensive guided tour introduces you to all five countries that make up the British Isles. Start with an overnight in London, then head west to prehistoric Stonehenge and then to the extraordinary Roman excavations in Bath. Next, spend a night in Newport, Wales, and travel via Cardiff to Pembroke for a ferry crossing to Ireland, where you will be welcomed with a typical Irish coffee, a Local Favorite on this guided tour. Enjoy a guided visit of the House of Waterford Crystal, see Ireland’s oldest handweaving mill at Avoca, and take a guided tour of St. Kevin’s 6th-century center of Irish Christianity in Glendalough. In Dublin, an orientation drive features O’Connell Street, St. Patrick’s Cathedral, and Trinity College with its Book of Kells. Cross into Northern Ireland, pass the Mountains of Mourne, and stop in vibrant Belfast before boarding a ferry bound for Scotland. In the capital city of Edinburgh, guided sightseeing includes a visit to the castle to admire Scotland’s Crown Jewels. Return to England, where you’ll see a section of Hadrian’s Wall (dating back to the 2nd century) and stop in medieval York to marvel at gothic York Minster. At Shakespeare’s Stratford-upon-Avon take pictures of Anne Hathaway’s Cottage and visit the Bard’s birthplace, before returning to London for an overnight and the conclusion of your journey.

Welcome to London! Uniformed Globus Hosts will be waiting to welcome you. After checking into your hotel and an afternoon at leisure, we recommend our optional Taste of London excursion with dinner followed by a guided illuminations cruise on the Thames River.

Meet your Tour Director and travelling companions and depart London at 8 am for a memorable day’s sightseeing. Try to unravel the mystery of prehistoric STONEHENGE; explore the stunning visitor centre with its imaginative exhibitions, then admire the magnificence of the monument up close. At the elegant Georgian city of Bath, see the amazing excavations of the ROMAN BATHS. Then, cross the Severn River for a late-afternoon arrival in Wales. Tonight, enjoy a welcome dinner with wine at your hotel. (B/D)

A morning orientation drive in the Welsh capital features all the major attractions. Take a guided tour of CARDIFF CASTLE, and discover its history of invasions, abductions, and conflicts over the past 2,000 years. Continue along the South Wales coast to Pembroke, where your FERRY will be waiting. Sail across St. George’s Channel to Rosslare on the Emerald Isle and proceed to Waterford, a stronghold founded by the Danish Vikings in 853. After dinner this evening, enjoy a traditional IRISH COFFEE. (B/D)

This morning, enjoy a guided tour of the HOUSE OF WATERFORD CRYSTAL/ and at Avoca, visit Ireland’s oldest HANDWEAVING MILL and watch the WEAVERS at work. Travel on to GLENDALOUGH, the early Christian monastic site founded by St. Kevin in the 6th century. See the engaging audio-visual Ireland of the Monasteries, then let your Local Guide show you the remains of this ecclesiastical settlement. On arrival in Dublin, top the day with an optional Irish cabaret evening including dinner, dance, song, and laughter. (B)

An orientation drive in Ireland’s capital city includes statue-lined O’Connell Street, elegant Georgian squares, St. Patrick’s Cathedral, and Oscar Wilde’s Trinity College. The afternoon is at leisure for you to explore this vibrant city. Tonight, maybe take in an optional dinner outing to the Guinness Storehouse. (B)

On your way to Northern Ireland, cross the Boyne River, then skirt the Mountains of Mourne. In Belfast, where the Titanic was built, take in the city’s vibrant history and view the impressive City Hall. Next, board your FERRY to cross the North Channel to Cairnryan on Scotland’s southwest coast and continue through the scenic Scottish border country to Edinburgh. Tonight, relax and enjoy our optional Scottish evening with Highland dancers, bagpipers, and the Ceremony of the Haggis. (B)

Morning city sightseeing with a local expert introduces you to the 200-year-old “New Town” and famous scientists, inventors, and novelists who lived there. In the “Old Town,” drive up the narrow Royal Mile to EDINBURGH CASTLE to admire Scotland’s Crown Jewels. The afternoon is free to enjoy the Scottish capital at your own pace. Later, a unique optional excursion: board the former Royal Yacht Britannia, and enjoy dinner at a local restaurant. For departure numbers 0731 through 0821, tickets are included for tonight’s performance of the world-renowned MILITARY TATTOO, a vast spectacle of massed Scottish pipe bands that takes place in an arena on the esplanade of Edinburgh Castle. (B)

This morning, drive past the abbey ruins at Jedburgh and the house of Mary, Queen of Scots, into wild Northumberland National Park. Later, see a section of Hadrian’s Wall, the Roman coast-to-coast defense against marauding northern tribes. In York, England’s most complete medieval city, stand in awe in front of the great structure of York Minster, then follow your Tour Director through a maze of quaint streets, including the narrow Shambles. (B/D)

On the last leg of your journey, stop at Stratford-upon-Avon, the fascinating Elizabethan town. Take pictures of Anne Hathaway’s Cottage, visit SHAKESPEARE’S BIRTHPLACE, and enjoy a light LUNCH. On return to London at about 3:30 pm, a Shownight Theatre Evening would be an incredible finale to your holiday. (B/L) 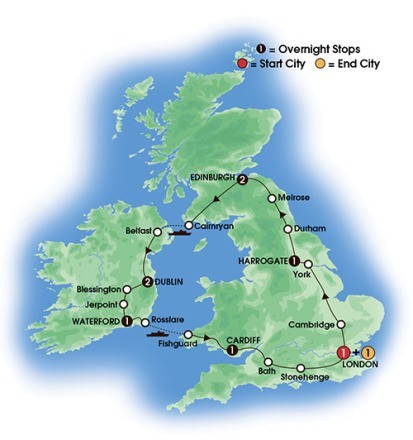 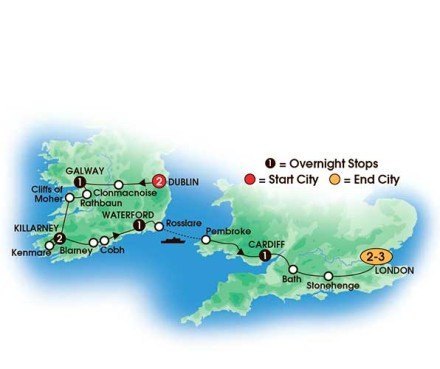