Day 1: Glasgow City Tour
Your Scottish trip starts at 2:00 pm at your hotel in Drymen, 20 miles north of Glasgow Airport. Meet your tour director and set out on a panoramic tour of central Glasgow. See the main attractions of Glasgow including red sandstone Victorian buildings, delightful parks, Glasgow Cathedral and the River Clyde, once famous for shipbuilding, especially during the 19th century when the city burgeoned. Return to your hotel and enjoy free time to rest and relax. Chat with your tour director and fellow travelers about your trip with a welcome drink before sitting down to dinner in your hotel.
(D)

Day 2: Stirling Castle & Loch Katrine Cruise
Drive north into the Trossachs region, often called “Scotland in Miniature” as all aspects of Scottish scenery are found here. Drive to Stirling to visit Stirling Castle. Walk through some of the many chambers and halls to learn about notable people such as “Braveheart” William Wallace and Mary, Queen of Scots. Embark on a short cruise aboard the steamboat, “Sir Walter Scott,” to view the natural beauty of Loch Katrine. Return to your hotel in good time for dinner.
(B, D)

Day 3: Glen Coe & Eilean Donan Castle
Today head up into the majestic Highlands. Journey across mysterious Rannoch Moor and through Glen Coe, a spectacular glen made famous by the Campbells’ massacre of the Clan Macdonald in 1692. Stop at Spean Bridge Woollen Mill and drive alongside some the long, narrow lakes in the Great Glen. Continue your drive north to visit the romantic Eilean Donan Castle. The first fortified castle was built in the 13th century, rebuilt several times and partially ruined in 1719. Check in to your charming family-owned hotel near Kyle of Lochalsh.
(B, D)

Day 4: Isle of Skye & Portree
Today cross to the Isle of Skye by bridge to explore this lovely island, sometimes called the “Misty Isle”. It has many strong associations with Bonnie Prince Charlie as he fled here after his defeat at Culloden Moor. Drive along the Trotternish Peninsula to view Kilt Rock, a sea cliff with huge, vertical basalt columns. Stop in Portree to get lunch on your own and take a walk to admire brightly-painted houses that cluster around a large bay. Return to your hotel for free time before dinner.
(B, D)

Day 5: Clan Donald Centre & Steam Train Ride
Visit the Clan Donald Centre at Armadale Castle to discover the history of the Lords of the Isles and the most powerful clan of the Isle of Skye. Take a ferry to Mallaig on the mainland and transfer to a train for a fun ride through some of Scotland’s loveliest scenery. The rails run alongside the “Road to the Isles” so you may view Loch Shiel and the Glenfinnan Monument, another reminder of Bonnie Prince Charlie. The train crosses the 21-arched Glenfinnan viaduct, which was featured in some of the Harry Potter movies. Reboard your coach at Fort William and drive to Inverness.
(B, D)

Day 6: Urquhart Castle & Culloden Battlefield
Cruise into Loch Ness to visit the picturesque ruins of Urquhart Castle, once Scotland’s largest castle which was destroyed in Jacobite wars. Stop at the Culloden Battlefield Visitor Centre to learn about the battle when British Government forces defeated the army of Bonnie Prince Charlie on 16th April 1746. The Visitor Centre shows the background to this bloody battle and you can walk around the moorland to see various monuments commemorating troops. Return to Inverness in time to relax and, after dinner, take a gentle walking tour with a local guide.
(B, D)

Day 7: Whisky Tasting & Brodie Castle
Drive through part of the Speyside region, where many distilleries are based close to sources of pure water from the River Spey. Visit a distillery to learn about the simple ingredients and many steps involved in whisky making. Tour the facilities and sample a “wee dram.” Visit Brodie Castle, a 16th century tower house with fairytale towers and turrets that is set in spacious grounds. The house contains fine furnishings, a collection of paintings and a library with over 6,000 volumes. Return to Inverness and enjoy some free time for a stroll along the River Ness in front of your hotel.
(B, D)

Day 8: Sheepdogs & St Andrews
Drive south through majestic Highland scenery to Leault Farm where dogs obey commands to round up sheep. Drive south through the high peaks of the Grampian Mountains and stop for a look around the town of Pitlochry. Drive to the east coast to St Andrews, the “Home of Golf.” See the famous Royal and Ancient Clubhouse and the Old Course and enjoy free time to browse in golf specialty stores or through the medieval town with its ruined cathedral and castle. Drive south to Edinburgh, Scotland’s capital, and your manor house hotel on the outskirts. Enjoy a Scottish Evening with dinner, lively singing and story-telling.
(B, D)

Day 9: Palace of Holyroodhouse & Edinburgh Tour
This morning explore Edinburgh on a sightseeing tour. Compare and contrast the wide streets and elegant mansions of the Georgian 200-year-old “New Town” with the narrow lanes and medieval townhouses along the Royal Mile, the oldest part of the city. See Princes Street, the main shopping thoroughfare that separates the two areas. Learn about many prominent Scottish inventors, doctors and writers. Tour the impressive Palace of Holyroodhouse, the official Scottish residence of The Queen, and walk through the majestically furnished chambers. The balance of the day is free. On Jul 28 to Aug 18 departures enjoy the Royal Edinburgh Military Tattoo at the Castle esplanade.
(B)

Day 10: Extend your Stay in Edinburgh
Spend the day on an independent hop-on hop-off bus tour of Edinburgh; there are a number of different routes that you may choose to explore distinct areas of the city.
(B)

Day 11: Depart Edinburgh for Home
Your tour ends after breakfast.
(B) 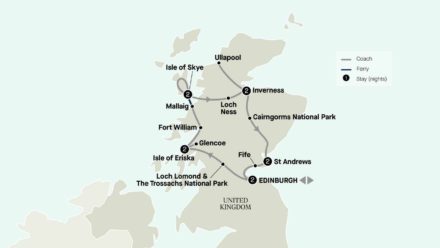 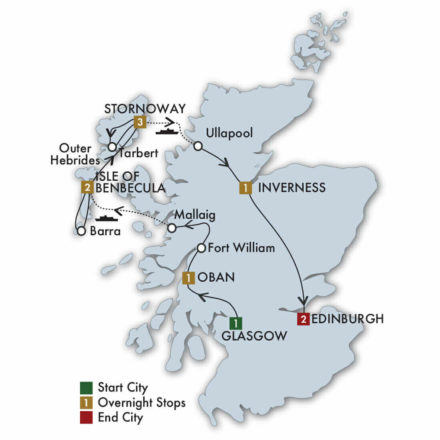 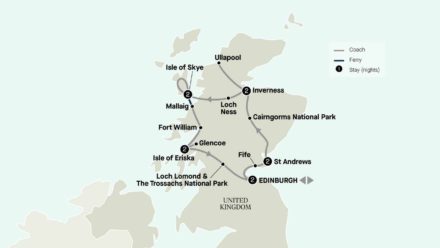