Journey through the lands of kings, queens, and leprechauns! Begin in London with two overnights and guided sightseeing that features the Houses of Parliament, Big Ben, Westminster Abbey, Buckingham Palace, and includes visits to St. Paul’s Cathedral and the Changing of the Guard, if held. Depart the city to admire the breathtaking gardens at Henry VIII’s Hampton Court Palace, then venture on to prehistoric Stonehenge and the Roman excavations at Bath. Cross into Wales and spend the night in Newport before ferrying across the Irish Sea to the Emerald Isle, where you will be welcomed with a typical Irish coffee, a Local Favorite on this tour. Highlights are a guided visit of the House of Waterford Crystal, Blarney, the resort town of Killarney, the spectacular Ring of Kerry, Limerick, the Irish National Stud in Kildare, and an orientation drive in Dublin that includes Trinity College and the 1,200-year-old Books of Kells. Visit Malahide Castle on your way to Northern Ireland’s capital Belfast, where you enjoy a guided Living History tour and explore the Titanic Exhibition. Also included is dinner in the restaurant of the famous Crown Liquor Saloon. Return across the Irish Sea and through scenic Border country to Edinburgh for visits to the castle and Holyrood Palace. On your return to England, see Alnwick. Stop to visit the impressive gothic York Minster, the largest gothic cathedral in Northern Europe, explore Shakespeare’s Stratford-upon-Avon, and visit beautiful Blenheim Palace before returning to London for the end of your adventure.

Welcome to London! Uniformed Globus Hosts are available to help you make the most of your stay.

Your morning sightseeing with a Local Guide includes all the famous landmarks: the Houses of Parliament and Big Ben beside the Thames River, Westminster Abbey, Whitehall’s mounted horseguards and the Prime Minister’s Downing Street, Piccadilly Circus, and Buckingham Palace. Highlights are a visit to ST. PAUL’S CATHEDRAL and the ceremonial pageantry of the Changing of the Guard, if held. This afternoon, why not join an optional excursion to the Tower of London or Windsor Castle, and later, maybe an optional dinner, followed by a cruise on the Thames River? (B)

Meet your Tour Director and travelling companions, and depart London at 8 am for a memorable day of sightseeing: a special visit to admire the breathtaking ORNAMENTAL GARDENS of Henry VIII’s Hampton Court Palace; prehistoric STONEHENGE, with its stunning visitor centre; and in the elegant Georgian city of Bath, the amazing excavations of the ROMAN BATHS. Cross the Severn River into Wales, and tonight, enjoy a welcome dinner with wine at your hotel. (B/D)

An orientation in the Welsh capital features the major attractions: Cardiff Castle, Cathays Park, and the stately civic buildings. Continue along the South Wales coast to Fishguard, where your FERRY is waiting. Sail across St. George’s Channel to Rosslare and proceed by coach to Waterford, a stronghold founded by the Danish Vikings in 853. After dinner this evening, enjoy an IRISH COFFEE DEMONSTRATION. (B/D)

Your first highlight today is a guided tour of the HOUSE OF WATERFORD CRYSTAL. Via the port city of Cork, motor to Blarney, renowned for its magical Kissing Stone, then on to Killarney for a two-night stay. Later, join an entertaining optional evening in Tralee with dinner followed by tickets for Siamsa Tire National Folk Theatre. (B)

Follow the road known as the RING OF KERRY for a spectacular 160-kilometre (100-mile) panoramic drive around the island’s south-western tip and take your photos of the Lakes of Killarney from Ladies View. This afternoon, maybe an optional fun-filled horse-drawn jaunting car ride. (B)

Drive to quaint Adare with its colourful thatched cottages and on to the Rock of Cashel, where St. Patrick preached. Then, visit the IRISH NATIONAL STUD/ whose fine thoroughbreds command respect on the racecourses of the world. Tonight, you may wish to enjoy an optional Irish cabaret evening, including dinner, dance, song, and laughter. (B)

Get an overview of Ireland’s capital as you drive to statue-lined O’Connell Street, elegant Georgian squares, St. Patrick’s Cathedral, and Oscar Wilde’s Trinity College. The afternoon is at leisure for you to enjoy this vibrant city. Why not join an optional dinner evening at the Guinness Storehouse? (B)

Set in 100 hectares (250 acres) of park land, and formerly both fortress and private home of the Talbot family for nearly 800 years, your first visit is at MALAHIDE CASTLE. Join your guide on a tour of the castle with its interesting mix of architectural styles, then stroll through the extensive gardens. On your way to Northern Ireland, cross the Boyne River and drive on to Belfast for a visit of the fascinating TITANIC EXHIBITION, where you learn all about the building of the largest passenger steam ship, its maiden voyage, and the tragic night of April 14, 1912. After your visit, enjoy a cup of TEA and a TRAY BAKE at Bistro 401. (B)

First thing this morning, a “LIVING HISTORY” TOUR in the company of a Local Guide. See all the famous landmarks, including the Parliament House at Stormont, City Hall, the Albert Memorial Clock Tower, and Queens University. Next, board your FERRY to cross the North Channel to Cairnryan on Scotland’s southwest coast and continue through the scenic Scottish border country to Edinburgh. Tonight, enjoy our optional Scottish evening with Highland dancers, bagpipers, and the Ceremony of the Haggis. (B)

Morning city sightseeing with a Local Guide introduces you to the 200-year-old “New Town” and famous scientists, inventors, and novelists who lived there. In the “Old Town,” drive up the narrow Royal Mile to EDINBURGH CASTLE to admire Scotland’s Crown Jewels, then explore HOLYROOD PALACE (when available). Afternoon at leisure. Later, a unique optional excursion: board the former Royal Yacht Britannia, once the perfect royal residence for glittering state visits and family holidays. For departure numbers 0726 through 0816, tickets are included for the world-renowned MILITARY TATTOO. (B)

Relax and enjoy vistas of the beautiful North Sea coastline as you drive via Berwick-upon-Tweed to Alnwick, voted the “best place to live in Britain” in a national survey. In York, England’s most complete medieval city, visit YORK MINSTER, the largest gothic cathedral in Northern Europe. Then, follow your Tour Director through a maze of quaint streets, including the narrow Shambles. (B/D)

In Coventry, view the splendid modern cathedral that rose from the rubble of severe World War II bombings, and in Stratford-upon-Avon, take your pictures of Anne Hathaway’s Cottage and visit SHAKESPEARE’S BIRTHPLACE. (B/D)

Today’s spectacular highlight is a guided tour of magnificent BLENHEIM PALACE, home of the 11th Duke of Marlborough and birthplace of Sir Winston Churchill. End the tour in style with a GLASS OF CHAMPAGNE while looking out over the Water Terraces. Depart after lunch and return to London at about 3:30 pm. How about celebrating the success of your holiday by taking in one of the great West End shows? (B)

Your holiday ends with breakfast this morning. (B)
\ 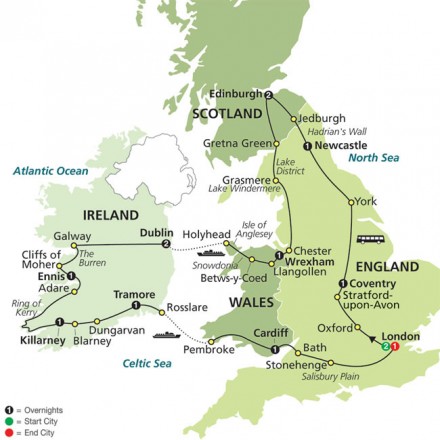 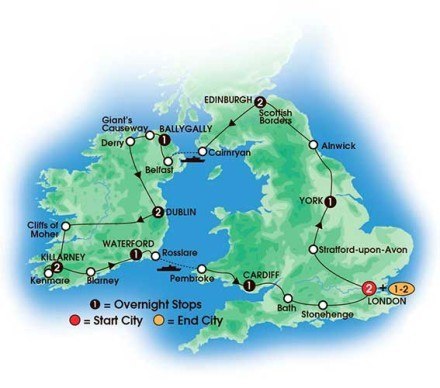