Discover the best of England, Scotland, Wales, and Ireland on this getaway that features five two-night stays. Your journey begins in England with visits to London, Henry the VIII’s Hampton Court Gardens, Oxford, Shakespeare’s Stratford-upon-Avon, Warwick Castle, and medieval York, where your Tour Director takes you on a walking tour through the narrow Shambles. Heading north, it’s on to the Scottish Lowlands and Highlands for visits of Sir Walter Scott’s Abbotsford House, Edinburgh with its castle and Holyrood Palace, St. Andrews, Braemar, Inverness, Culloden Moor, Glasgow, Gretna Green, and a cruise on Loch Lomond. Return to England to take in the serene Lake District and the Beatles Story in Liverpool before passing through Snowdonia National Park in Wales en route to Ireland. Some of the highlights include the Fair City of Dublin with a visit to Trinity College, the Irish National Stud at Kildare, the breathtaking Cliffs of Moher, Galway, scone baking at Rathbaun Farm, Killarney, the Ring of Kerry, Blarney, and the House of Waterford Crystal. Ferry across St. George’s Channel and drive to Bath to see the amazing Roman excavations. Stay two nights in Exeter and drive into Dartmoor National Park for dinner at a local inn, then enjoy an excursion to the former smuggler’s port of Looe and to Plymouth. Return to London via prehistoric Stonehenge.

Morning sightseeing with a Local Guide includes all the famous landmarks: the Houses of Parliament and Big Ben beside the Thames River, Westminster Abbey, Whitehall’s mounted horseguards and the Prime Minister’s Downing Street, Piccadilly Circus, and Buckingham Palace. Highlights are a visit to ST. PAUL’S CATHEDRAL and the ceremonial pageantry of the Changing of the Guard, if held. This afternoon, why not join an optional excursion to Windsor Castle or the Tower of London, and later, maybe an optional dinner, followed by a cruise on the Thames River? (B)

Meet your Tour Director and travelling companions and depart London at 8 am for a lovely day of sightseeing: a special visit to admire the breathtaking ORNAMENTAL GARDENS of Henry VIII’s Hampton Court Palace; Runnymede, site of the sealing of the Magna Carta; and a walking tour in the university city of Oxford. At Stratford-upon-Avon, visit SHAKESPEARE’S BIRTHPLACE and take your pictures of Anne Hathaway’s Cottage. Tonight, enjoy a welcome dinner with wine at your hotel. (B/D)

A spectacular start to the day with a special, pre-public-opening guided tour of magnificent WARWICK CASTLE. Marvel at the opulent Great Hall and State Rooms, and visit the former private apartments. Later, in York, stand in awe in front of the great Minster, then follow your Tour Director through a maze of quaint streets, including the narrow Shambles. (B/D)

See a section of Hadrian’s Wall, and in Jedburgh, take pictures of the abbey ruins and the house of Mary, Queen of Scots. Then, take a guided tour of Sir Walter Scott’s newly refurbished ABBOTSFORD HOUSE, and after the tour, enjoy a CUP OF TEA and SHORTBREAD at the new visitors’ centre. Spend the next two nights in Edinburgh, the Scottish capital. Tonight, consider an optional Scottish evening with Highland dancers, bagpipers, and the Ceremony of the Haggis. (B)

Morning city sightseeing with a Local Guide introduces you to the 200-year-old “New Town” and famous scientists, inventors, and novelists. In the “Old Town,” drive up the narrow Royal Mile to EDINBURGH CASTLE to admire Scotland’s Crown Jewels, then explore HOLYROOD PALACE (except when the Queen is in residence). Later, a unique optional experience: board the former Royal Yacht Britannia to see how the Royal Family and crew of 240 lived and worked on board. Dinner rounds off this optional evening. For departure numbers 0802 through 0825, tickets are included for tonight’s performance of the world-renowned MILITARY TATTOO. (B)

Drive over the elegant Forth Road Bridge and through Fife to St. Andrews, whose Royal and Ancient Golf Club has given us the rules of golfing. Then, through Braemar, home of the Royal Highland Games, to BALMORAL CASTLE (when available). Overnight at Inverness, the Highland capital. (B/D)

At CULLODEN VISITOR CENTRE, hear the story of the crushing Hanoverian victory over Bonnie Prince Charlie’s Scottish clans. Then, enjoy a day full of Highland splendor: Loch Ness with its mysterious monster, Fort William beneath Ben Nevis, Loch Linnhe, and haunting Glen Coe. Motor across wild Rannoch Moor to the “Bonnie Banks” of Loch Lomond for a CRUISE on the loch before heading south to Glasgow. (B/D)

On the way through the Lowland Hills, stop at Gretna Green, where the blacksmith used to wed runaway couples. Enter the beautiful Lake District and visit Grasmere, home of poet William Wordsworth. In Liverpool, visit the award-winning BEATLES STORY, an atmospheric journey into the life, times, culture, and music of the “Fab Four.” (B)

Cross the border into North Wales and drive to lovely Betws-y-Coed and through the incomparable landscapes of Snowdonia National Park. After a stop at tongue-twisting Llanfair… board your FERRY at Holyhead for the crossing to Dublin. For a first taste of Ireland, why not join an optional Irish cabaret evening, including dinner, dance, song, and laughter? (B)

An orientation drive in the Irish capital includes statue-lined O’Connell Street, elegant Georgian squares, St. Patrick’s Cathedral, and Oscar Wilde’s Trinity College. The afternoon is at leisure for you to enjoy the vibrant city. Maybe take in an optional dinner outing to the Guinness Storehouse. (B)

Across the Curragh to the IRISH NATIONAL STUD at Kildare. On the way to Limerick, see the Rock of Cashel, Tipperary, and on arrival, an orientation drive acquaints you with St. Mary’s Cathedral, King John’s Castle, and the stone where the Treaty of Limerick was signed in 1691. Tonight, you might like to join an optional banquet at Knappogue Castle. (B)

A breathtaking view of the Clare coast from the 204-metre (668-foot) CLIFFS OF MOHER, then a drive across the limestone plateau of The Burren to the port city of Galway. Next, a real Irish farm experience at RATHBAUN FARM. Try your hand at scone making, and learn from the farmer about sheep shearing and dog whistling. Afterwards, enjoy COFFEE and your SCONES, fresh from the oven. (B)

Via quaint Adare with its pretty thatched cottages, and Killorglin on Dingle Bay, join the spectacular RING OF KERRY for a 161-kilometres (100-mile) panoramic drive around the island’s southwestern tip. Take your photos of the Lakes of Killarney, then spend some time in this resort town before arriving in Tralee. (B/D)

Morning visit to Blarney, renowned for its magical Kissing Stone. Time for lunch, to walk up to the castle, and to shop for traditional Irish handicrafts. In the afternoon, proceed via Cork to Waterford, a stronghold founded by the Danish Vikings, where you join a guided tour of the HOUSE OF WATERFORD CRYSTAL. (B/D)

By FERRY from Rosslare across St. George’s Channel to Pembroke and a drive through South Wales. Why not join an evening of Welsh entertainment and dinner tonight? (B)

First this morning, journey to the elegant Georgian city of Bath to explore the amazing excavations of the ROMAN BATHS. You will also have time to explore the town further on your own. Then, focus on King Arthur’s Glastonbury before heading to Exeter, your destination for the next two nights. Later, head into wild and romantic Dartmoor for a tasty DINNER at a local pub. (B/D)

Your Cornwall excursion takes you first to the pretty shark-fishing village and former smuggler’s port of Looe. Then, cross the Tamar River to Plymouth to see the Mayflower Steps, where the Pilgrim Fathers embarked in 1620, and hear about Sir Francis Drake. Why not join an optional cruise on Plymouth Sound before you return to Exeter? (B/D)

For the finale of your journey, travel to prehistoric STONEHENGE and try to unravel its mystery. Explore the stunning new visitor centre with its imaginative exhibitions, then take the shuttle to the stone circle and admire the magnificence of the monument up close. Return to London around 4 pm. How about celebrating the success of your holiday by taking in one of the great West End shows? (B) 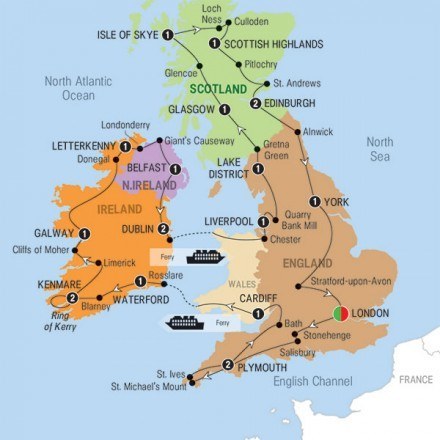