This extensive vacation covers the British Isles – Scotland, England, Ireland, Northern Ireland, and Wales. No other tour is as complete. Begin your trip with two overnights in London and time to explore on your own or to take an optional tour. Head to Henry VIII’s Hampton Court Palace; enjoy a walking tour of Oxford, where Britain’s elite receive their education; and via the exquisite Cotswolds to Shakespeare’s Stratford-upon-Avon and Lady Godiva’s Coventry. Continue on to York, England’s most complete medieval city, for a walking tour with your Tour Director. See a section of Hadrian’s Wall, the Roman coast-to-coast defense against marauding northern tribes, and enter Scotland for two overnights in regal Edinburgh. In the Scottish capital, your tour includes a visit to mighty Edinburgh Castle. On to St. Andrews, home of golf, and via Dundee and Perth to the Victorian mountain resort of Pitlochry. Then cross the battlefield of Culloden Moor on the way to your Highland destination. Enjoy an excursion to the spectacular west coast of Scotland, then arrive on the beautiful Isle of Skye. Scenic highlights await you on the way to Glasgow, and an orientation drive acquaints you with the major attractions. Ferry to Belfast in Northern Ireland and visit remarkable Giant’s Causeway on the way to Derry. Travel to Knock, where pilgrims flock to the Marian Shrine; see the breathtaking Cliffs of Moher; and drink in the scenery on the Dingle Peninsula and along the gorgeous Ring of Kerry. Visit popular Killarney; Blarney, known for its Stone of Eloquence; and Waterford, famous for its crystal. Stop at Ireland’s oldest handweaving mill at Avoca and enjoy Glendalough with its ruins of St. Kevin’s Centre of Irish Christianity. In Dublin, Ireland’s capital, an orientation drive shows you the sites. Then, ferry back across the Irish Sea to Holyhead and travel south through scenic Wales with stops in Wrexham and Cardiff. Return to England and explore elegant Georgian Bath, famous for its Roman ruins. Hear about King Arthur in Glastonbury, stop in Widecombe-in-the-Moor, and in Plymouth, see where the Pilgrim Fathers embarked on their monumental journey in 1620. Also see St. Michael’s Mount and Land’s End on the way to the seaside town of St. Ives. Experience mysterious Stonehenge, overnight in Brighton, and take a break in Royal Tunbridge Wells before returning to London for the finale of your awesome adventure.

Check into your hotel. In the afternoon, there’s time to rest or to start exploring the lively British capital; uniformed hosts are available to help you make the most of your stay.

What’s your pleasure? Today is devoted to exploring on your own or enjoying our exciting program of optional activities. You may choose to join a Local Guide for an optional morning sightseeing tour of the city’s famous landmarks: the Houses of Parliament and Big Ben, Westminster Abbey, Whitehall’s mounted horseguards and the Prime Minister’s Downing Street, Piccadilly Circus, and Buckingham Palace. Highlights include a visit to St. Paul’s Cathedral and the ceremonial pageantry of the Changing of the Guard (if held). Later on, maybe visit Windsor Castle or the Tower of London with its spectacular Crown Jewels, and tonight, a leisurely cruise on the Thames River would be fun! (B)

Meet your Tour Director and travelling companions and depart at 8 am for a memorable day of sightseeing: a photo opportunity at Hampton Court Palace; Runnymede, where King John sealed the Magna Carta; a walking tour in Oxford, one of the country’s oldest seats of learning; and skirting the Cotswold Hills to Shakespeare’s Stratford upon- Avon. Take photos of Anne Hathaway’s Cottage and explore the town at your own pace. Overnight is near Coventry. (B/D)

Leave the Midlands and head north to York, England’s most complete medieval city. Stand in awe in front of the great structure of York Minster, then follow your Tour Director through a maze of quaint streets, including the narrow Shambles. Stop for the night in Newcastle, once an important centre for the wool trade and coal mining and now a vibrant modern city. (B/D)

See a section of Hadrian’s Wall, the Roman coast-to-coast defence against marauding northern tribes, then motor through wild Northumberland National Park to the Scottish border. Stop for photos at Jedburgh, with glimpses of the house of Mary, Queen of Scots, and then Melrose with its 12th-century abbey ruins and connections with Robert the Bruce. Later, a unique optional experience: board the former Royal Yacht Britannia, which was once the perfect royal residence for glittering state visits and family holidays. Tour five decks and see how the Royal Family and crew of 240 lived and worked on board. Dinner rounds off this optional evening. For departure numbers 0731 through 0821, tickets are included for tonight’s performance of the world renowned MILITARY TATTOO. (B)

A full day to enjoy the Scottish capital. Morning sightseeing with a Local Guide introduces you to the 200-year-old “New Town” and famous scientists, inventors, and novelists. In the “Old Town,” drive up the narrow Royal Mile to EDINBURGH CASTLE to admire Scotland’s Crown Jewels. Afternoon at leisure. A suggestion for this evening: a traditional Scottish night out with Highland dancers, bagpipers, and, of course, the Ceremony of the Haggis. (B)

A day of memorable sightseeing. Take the elegant Forth Road Bridge to St. Andrews, whose Royal and Ancient Golf Club has given us the rules of golfing, then cross the Firth of Tay and via Dundee and Perth, head into the Highlands, with a stop in the Victorian mountain resort of Pitlochry. Cross the battlefield of Culloden Moor with its memories of Bonnie Prince Charlie, then via Inverness, head for your Highland destination. (B/D)

More spectacular Scottish scenery: Dornoch Firth, the Kyle of Sutherland, the Mountains of Assynt, and Knockan Crag. Then, follow Strath Oykel for a visit to Ullapool, a remote fishing harbor on Loch Broom, before returning along Loch Glascarnoch. Our recommendation for this evening: join the optional Loch Ness Experience, which includes a cruise on the loch, followed by supper. (B)

More heather-clad moors as you drive through the western Highlands to Lochalsh and the Inner Hebridean Isle of Skye. The route back to the mainland is by FERRY across the Sound of Sleat to Mallaig, then breathtaking scenery all the way to Fort William beneath Ben Nevis. Glen Coe, where the MacDonald Clan was massacred in 1692, and a drive along the “Bonnie Banks” of Loch Lomond are scenic highlights on the way to Glasgow, Scotland’s great cultural city. (B/D)

On this morning’s orientation drive through Scotland’s largest city, see the fine 12th-century cathedral, imposing university buildings, and elegant Georgian squares, built by wealthy tobacco barons. Later, stop at Alloway, the birthplace of Robert Burns, before boarding the FERRY for the Irish Sea crossing to Belfast. Consider joining tonight’s optional excursion: a “living history” tour of this fascinating city in the company of a Local Guide. (B)

Take the scenic route along the Antrim Coast to awe-inspiring GIANT’S CAUSEWAY, then let the province’s story unfold as you head for the city of Derry, and, later, BELLEEK POTTERY, renowned for its exquisite cream-coloured Parian china. At Drumcliff, see the grave of native son and poet W.B.Yeats before arriving in Sligo, tonight’s destination. (B/D)

Travel south to Galway, a popular seaside destination and a buzzing cosmopolitan centre with colourful shops and a busy cafe and bar culture. Then, cross the limestone plateau of The Burren to visit the spectacular 204-metre (668-foot) CLIFFS OF MOHER. Tonight, a chance to attend an optional banquet at Bunratty Castle. (B)

Via Clonderlaw Bay to Killimer for the FERRY across the Shannon estuary. Breathtaking scenery this afternoon on the Dingle Peninsula, where the 51-kilometre (32-mile) Slea Head drive affords magnificent vistas of the Atlantic Ocean. Afternoon arrival in Killarney, your destination for the next two nights. (B/D)

At Killorglin, join the road known as the RING OF KERRY for a 160-kilometre (100-mile) coastal panoramic drive: sparkling seascapes, mountains dotted with brightly coloured farmhouses, winding lanes bordered with subtropical vegetation, and spectacular views of the Lakes of Killarney. Then, a special optional adventure: take a horse-drawn jaunting car along the national park lakeshore for pictures of Ross Castle. Later, enjoy the optional outing to Tralee for dinner and a performance at Siamsa Tire, Ireland’s National Folk Theatre. (B)

More scenic splendour as you head into County Cork. Stop in Blarney, famous for its Stone of Eloquence, with time at your leisure to see the castle and shop for Irish crafts and handmade crystal. After lunch, drive past Cork, the country’s second-largest city. Finally, Dungarvan and along the Copper Coast to the seaside resort of Tramore. Tonight, maybe join an optional pub tour before dinner at your hotel. (B/D)

Highlights on your northbound journey: Waterford, famed for its exquisite crystal; Enniscorthy, site of the final battle of the Great Rebellion of 1798; a visit to Ireland’s oldest HANDWEAVING mill at Avoca; views of the Wicklow Mountains; and Glendalough with its ruins of a centre of Irish Christianity, founded by St. Kevin. Afternoon arrival in Dublin-top off the day with an optional Irish cabaret evening including dinner, dance, song, and laughter. (B)

A day in the “Fair City” starts off with an orientation drive through Ireland’s capital and includes statue-lined O’Connell Street, elegant Georgian squares, and St. Patrick’s Cathedral. The rest of the day is free to enjoy Dublin at leisure. Top the day with an optional dinner evening at the Guinness Storehouse. (B)

Take the FERRY across the Irish Sea to Holyhead on the Welsh Isle of Anglesey with its tongue-twisting place names. Enjoy the best of North Wales on a scenic drive through Snowdonia National Park, including spectacular Llanberis Pass, then on to Llangollen, home of an annual national competition for poets and musicians, before arriving in Wrexham. This evening, why not join an optional excursion by barge along the Llangollen Canal? (B/D)

A day dedicated to Wales as you head South through the ancient market town of Builth Wells and the Brecon Beacons National Park, land of salmon rivers and the Welsh mountain pony. In Cardiff, an orientation drive takes in Cathays Park with its splendid civic buildings and Cardiff Castle. Tonight’s optional excursion is an evening of Welsh entertainment and dinner. (B)

Across the Severn Bridge to the elegant Georgian city of Bath, famed for its Roman relics. Into the West Country via Glastonbury and its associations with King Arthur, and wild and romantic Dartmoor with a visit to the picture-book village of Widecombe-in-the-Moor. Upon arrival in Plymouth, hear about Sir Francis Drake and see the Mayflower Steps, where the Pilgrim Fathers embarked in 1620. (B/D)

A day full of West Country sights as you head through Daphne du Maurier’s Cornwall. After viewing St. Michael’s Mount rising boldly out of the sea, take your photos at Land’s End before exploring the popular seaside resort of St. Ives. You may wish to join an optional cruise on Plymouth Sound this evening. (B)

An interesting day heading into Thomas Hardy’s Wessex and a visit to intriguing, prehistoric STONEHENGE. Explore the stunning visitor centre with its imaginative exhibitions, then admire the magnificence of the monument up close. Stop for photos at historic Arundel, dominated by the Duke of Norfolk’s huge castle, before continuing on to the seaside resort of Brighton for an overnight stay. (B/D)

A leisurely last day on the road with time this morning for a seafront promenade stroll or to browse along The Lanes, a quaint area of narrow streets renowned for its antique shops. Finally, take the scenic route to Royal Tunbridge Wells and pause for lunch in this picturesque spa town before returning to London about 3 pm. How about celebrating the success of your tour with a night out on the town? (B) 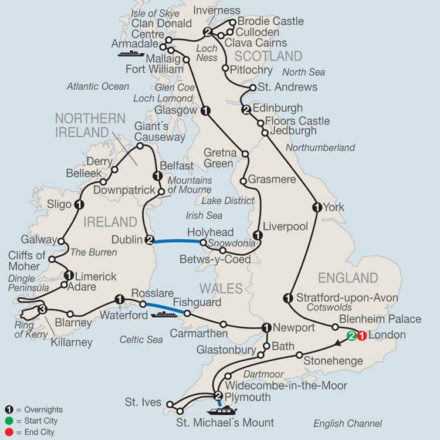