The Best Of Ireland In Under A Week

Visit all the unmissable Irish destinations including the famous Wild Atlantic Way while still experiencing Ireland at your own pace. Choosing this hub-and-spoke tour, guests on the Six-Day Iconic Scenes of Ireland stay in two quality hotels for the duration of their vacation. That means less time re-packing and checking in – more time for a truly unforgettable adventure.

Discover Ireland in less than a week. The 6 Day Iconic Scenes of Ireland Tour is an action packed adventure through the highlights of Ireland. Click on the days below to find out what adventures await you on each day of your tour.

On arrival in Dublin Airport reclaim your baggage and enter the Arrivals Hall. Here in the Arrivals Hall you will meet your tour guide (who is also your driver). There will be 3three group transfers this morning between 0700 am & 1200 noon. Board your luxury air – conditioned coach and make the short transfer to Clayton Hotel Burlington Road in the heart of Dublin City.

Check in starts from 15:00 and you can store your luggage at the hotel prior to check in. At 1400 you will depart on a Panoramic Tour of Dublin City visiting Trinity College founded in 1592 by Queen Elizabeth I on the site of an Augustinian monastery. Trinity College is also home to the Book of Kells, which is the most richly decorated of Ireland’s medieval illuminated manuscripts. The book contains the four gospels in Latin. Some of the dyes used were imported from as far as the Middle East.

You will also visit the Guinness Storehouse at St. James’s Gate for a tour of the world famous brewery and afterwards enjoy a perfect pint of Guinness in the Gravity Bar, which is located at the top of a glass tower that commands spectacular views of Dublin City and County in every direction.

Evening free in Dublin. You might like to pay a visit to Davy Byrnes Pub. Tonight you will be staying in the Clayton Hotel Burlington Road.

After some much needed sleep and a hearty full Irish breakfast you will depart for Glendalough in the spectacular Wicklow Mountains. The steep wooded slopes of Glendalough, the “valley of the two lakes”, harbour one of Ireland’s most atmospheric monastic settlements. Sacked time and again by the Vikings, it nevertheless flourished for over 600 years.

Return to the Fair City of Dublin in the afternoon. You will have the afternoon free to explore and shop in Dublin and we would also suggest you take a stroll up Grafton Street.

This morning after breakfast you will depart for Limerick via Galway. Free time in Galway City, known as the “City of the Tribes” and is located right on the famous Wild Atlantic Way. Take a ramble to Salthill Promenade, a Wild Atlantic Way discovery point, or down Quay Street with its many great pubs including “The Quays” and “Ti Neachtain” a town house which belonged to “Humanity Dick”, an eighteenth-century MP who promoted laws against cruelty to animals.

Continue south along the shores of Galway Bay before travelling down the Wild Atlantic Way to County Clare. Here you will see the Burren, which is Gaelic for rocky land – an apt name for this vast limestone plateau. In the 1640’s, Cromwell’s surveyor described it as “a savage land, yielding neither water enough to drown a man, nor tree to hang him, nor soil enough to bury”.

On the Atlantic coast you will stand on the dramatic 214 metres (704 feet) high and 8 kilometres (5 miles) long Cliffs of Moher, a Wild Atlantic Way signature discovery point, to gaze out on the vastness of the Atlantic Ocean. Travel onto Limerick City. Tonight you will overnight at the Clayton Hotel Limerickoverlooking the banks of the broad majestic Shannon.

This morning after an early breakfast you will set off for the world famous Ring of Kerry. Travel through the beautiful thatched village of Adare to Killarney before touring the Ring of Kerry (Iveragh Peninsula) via Killorglin, Glenbeigh, Cahersiveen, Waterville, Coomakesta Pass with it magnificent views over Derrynane, home of Daniel O’ Connell (known as “The Liberator”), to Caherdaniel.

Today you will have a pub lunch in The Blind Piper Pub in the village of Caherdaniel. Locals and visitors alike have been drinking here since 1865. Who was the Blind Piper? The Blind Piper is Mici Cumba O’Sullivan who was born nearby in 1835 and became one of Ireland’s most famous pipers.

Continue on via the pretty village of Sneem, Moll’s Gap, Ladies View and along the Lakes of Killarney to Killarney. Free time in Killarney before returning to Limerick.

After a hearty Irish breakfast this morning you will depart for Cork City on the banks of the River Lee, home of Murphy’s Original Irish Stout, and considered by many Corkonians to be the real capital of Ireland!

Visit Blarney Castle built in 1446 by Dermot McCarthy and here you will have the opportunity to kiss the legendary Blarney Stone. You will have an opportunity for shopping at Blarney Woolen Mills where one of the largest selections of Irish arts, crafts & produce can be seen on display.

In Midleton Town you will visit Jameson Old Midleton Distillery, Home of Jameson Whiskey, where you will also see the world’s largest pot still with a capacity of over 30,000 gallons. Finally, we return to Limerick City, where you will once again overnight in the Clayton Hotel Limerick.

Today marks the end of the 6 Day Iconic Scenes of Ireland Tour. After an Irish breakfast, your transfer will convey you to Shannon Airport or to Dublin City. 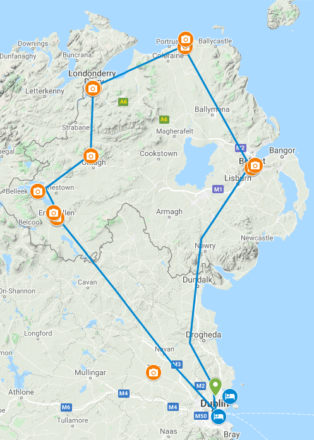 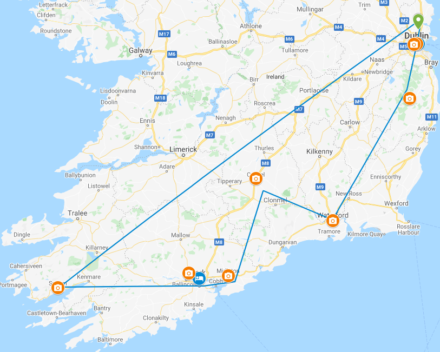 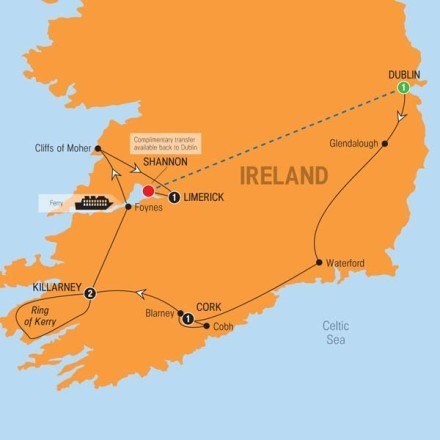