6 Day Kent The Garden of England

Open a treasure box of storybook castles, secret tunnels and enchanting gardens as we dedicate six days to England’s exquisite South East. On our travels we’ll see why Whitstable has been dubbed the ‘Pearl of Kent’ – and discover the tales that make Canterbury the jewel in the county’s crown.

After meeting the group in London, we’ll set a course for our first historic stop: Chartwell House. Many of us will know the public face of Sir Winston Churchill, but a chance to see inside Chartwell will give us a glimpse into his private home. From the library to the sitting room and study, this red stone manor is a time capsule brimming with insights into 1930s family life. We’ll move on to Canterbury this afternoon – where a welcome dinner awaits.
(D)

Our second day will begin with a visit to the magnificent Canterbury Cathedral. The oldest working church in England, this UNESCO World Heritage Site is home to medieval ruins, an oak-roofed Chapter House and a staggering gothic nave. Then: we’ll move on to medieval Sandwich, and Broadstairs – which Dickens immortalised as ‘Our English Watering Place’. Tonight, we’ll rest our heads in the grounds of the spectacular Leeds Castle.
(B/D)

This morning we’ll take some time to explore Leeds Castle on a guided tour of the famous moat, the areas below stairs and the grand bedrooms (some of which were favoured by King Edward VIII and Wallis Simpson during their frequent stays). Then: onwards to the Shepherd Neame Brewery in Faversham, where we’ll be treated to a tour – with the chance to sample some award-winning beers. We’ll round off the day with a seaside stroll in the quaint town of Whitstable before returning to the castle for the evening.
(B)

Next stop: historic Tenterden, a quintessentially English town overlooking the valley of the River Rother. After taking a look around, we’ll pull up a chair and get comfy at the Chapel Down winery – where we’ll clink glasses over an included wine tasting. Our final destination of the day will be the charming market town of Rye, where we’ll pay a visit to the Rye Heritage Centre.
(B/L)

Today we’ll dedicate some time to exploring Rye’s cobbled lanes and timber-clad houses, experiencing some of the magic that inspired writers and artists such as Henry James and Paul Nash. After tracing the shoreline and spotting those famous white cliffs, we’ll arrive at Dover Castle: the gateway to the English coast. This fortress boasts evocative interiors that tell centuries of historic tales, not to mention farreaching views from the Great Tower and dark medieval tunnels with covert cannons every few paces. The afternoon will see us back in Rye, where some free time will allow for the chance to see more of the town before our farewell dinner.
(B/D)

There’s still time for two more stops before our tour comes to a close. After visiting Sissinghurst Castle (where we’ll find poet and writer Vita Sackville-West’s famous gardens), we’ll move on to Hever Castle – the fairytale childhood home of Anne Boleyn. Then: back to London, where we’ll say our goodbyes.
(B) 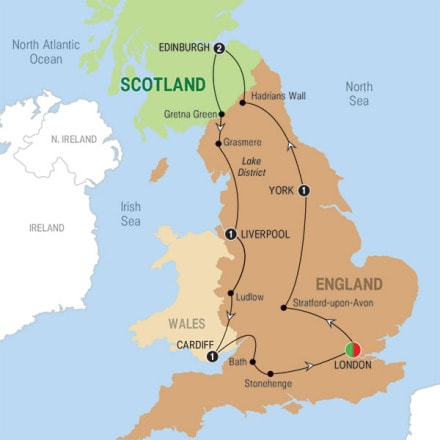 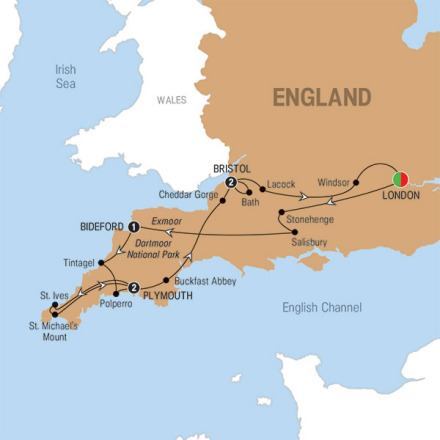