In one unforgettable week, see the true face of Ireland. This tour invites you to explore not only the top tourist attractions but also the road less travelled. Staying in real Irish castles, your journey stretches from the unmissable sights of the Wild Atlantic Way to the hidden treasures of Ireland’s Ancient East. A magical journey and a discerning choice.

Over the course of seven magical days, take in Ireland’s must-see destinations, the roads less travelled and stay in some of its most elegant castles. Click on the days below to find out what adventures await you on each day of your tour.

15:00 Check in time. Hotel reception will store your luggage prior to check in.

There will be 3 Group transfers this morning between 07:00 am and 12:00 noon. Board your luxury air-conditioned coach and make the short transfer to the Gresham Riu Plaza Hotel located in the beating heart of Dublin city where you can relax and unwind after your flight.

At 19:00 this evening all participants will gather for dinner in the Gresham Riu Plaza Hotel restaurant where you will become acquainted with your fellow travellers and the coming days can be discussed at leisure with your tour guide.

After breakfast this morning you will make the short journey to the “Fair City” of Dublin, Ireland’s capital. Here you will explore some of the capital’s best-loved attractions.

Trinity College founded in 1592 by Queen Elizabeth I on the site of an Augustinian monastery. Trinity College is also home to the Book of Kells, which is the most richly decorated of Ireland’s medieval illuminated manuscripts. The book contains the four gospels in Latin. Some of the dyes used were imported from as far as the Middle East.

The Guinness Storehouse at St. James’s Gate for a tour of the world famous brewery and afterwards enjoy a perfect pint of Guinness in the Gravity Bar, which is located at the top of a glass tower that commands spectacular views of Dublin City and County in every direction.

In the afternoon depart for Kinnitty Castle in the foothills of the Slieve Bloom Mountains in County Offaly in the Hidden Heartlands of Ireland. This unique castle has had a long & turbulent history from the Norman’s in the 12th century to its destruction by Republican Forces in 1922 to the present day. It now stands as an intimate and cosy castle hotel.

Tonight you will overnight & dine in Kinnitty Castle. After dinner you might like to retire to the Dungeon Bar for a nightcap before bed.

This morning after breakfast depart for Co Kilkenny. Visit Kilkenny Castle, which has been an important site since Strongbow constructed the first building of a wooden tower in the 12th century. William, the Earl Marshall built the first stone castle on the site in 1260

Take time to stroll the medieval streets of Kilkenny and you might want to visit the Kilkenny Design Centre or take time for a pint of Smithwicks, an Irish Red Ale brewed in Kilkenny. You will have a unique home cooked lunch experience today on a family farm outside Kilkenny. After lunch your hosts will give you a demonstration class in making delicious traditional home baked scones.

Continue onto Tipperary to visit the Rock of Cashel. This was the seat of kings and mediaeval bishops for 900 years and flourished until the early 17th century. Brian Ború was crowned the King of Munster here in 977 and he became the High King of Ireland in 1002.

After some much needed sleep and a hearty full Irish breakfast depart for Abbeyglen Castle Hotel majestically set on the Sky Road overlooking the town of Clifden in Connemara, County Galway. Travelling west your route today will take you along the Wild Atlantic Way up the west coast of County Clare and via the famous Galway Bay.

Depart west via County Limerick to County Clare. On the west coast of Ireland you will visit the dramatic 214 metres (704 feet) high and 8 kilometres (5 miles) long Cliffs of Moher, a Wild Atlantic Way signature discovery point, gazing out on the vastness of the Atlantic Ocean.

You will see the Burren, which is Gaelic for rocky land – an apt name for this vast limestone plateau. In the 1640s, Cromwell’s surveyor described it as “a savage land, yielding neither water enough to drown a man, nor tree to hang him, nor soil enough to bury”.

Travel on via Galway into the wilds of Connemara and via the villages of Oughterard, Maam Cross and Recess to Clifden. Clifden – the capital of Connemara was founded in 1812 by the High Sheriff of Galway to create a pocket of respectability within the lawlessness of Connemara.

Tonight you will overnight & dine in Abbeyglen Castle Hotel. After dinner you might like to retire to the Lounge for a nightcap (Connemara Single Malt Irish Whiskey is just a suggestion) before bed.

Today you will tour the sights of wild Connemara famous for its bogs, mountains, lakes and rugged coastline. You will visit Kylemore Abbey, which is nestled at the base of Dúchruach Mountain on the northern shore of Lough Pollacappul, in the heart of the Connemara Mountains. It is regarded as one of Ireland’s most romantic buildings. Continue on via Connemara National Park to Leenane (The film location of “The Field” featuring Richard Harris as The Bull McCabe).

At Nancy’s Point just outside Leenane Village you will board the “Connemara Lady” for a spectacular 90 minute cruise on Ireland’s only fjord. Cruising the sheltered Killary Harbour fjord, a Wild Atlantic Way signature discovery point, is the ideal way to take in the dramatic sweep of the landscape, as you pass between the Twelve Bens and the Maam Turk mountains to the South, in County Galway; and the Mweelrea mountains to the North in County Mayo, as well as the views out to the Atlantic at the mouth of the fjord. The fjord’s sheltered waters are perfect for mussel farming and you will see the ropes at several points on the fjord. You will also see some circular salmon farms, closer to the shore. Sheep dot the hills and now ramble freely over the remnants of potato ridges which stand testimony to The Great Famine of the 1840’s. Return to Abbeyglen Castle via the rugged & lonely Inagh Valley.

Tonight you will overnight & dine in Abbeyglen Castle Hotel. After dinner you might like to take a short stroll into Clifden and enjoy a drink in one of its many fine pubs – E.J Kings, Lowry’s or Griffins to name a few!

After breakfast this morning journey back to the “Fair City” of Dublin, Ireland’s capital city. Visit Tullamore D.E.W Whiskey Distillery in Co Offaly, where you will learn about the art of Irish whiskey-making and discover the secret that gives Tullamore D.E.W. its unique complexity with a tour of Triple whiskey tasting.

Continue onto Dublin. Tonight you will have a farewell dinner and a mighty evening of Irish music, song & dance at the Merry Ploughboy Pub.

After a great night we will make our way to the Gresham Hotel Riu Plaza in Dublin City to get a good night’s rest for your journey home in the morning.

Today marks the end of the Castle & Backroads Tour.

After a final great Irish breakfast this morning there will be 2 group transfers between 0500 and 1100 for you to choose from to get you to Dublin Airport for your return flight home. 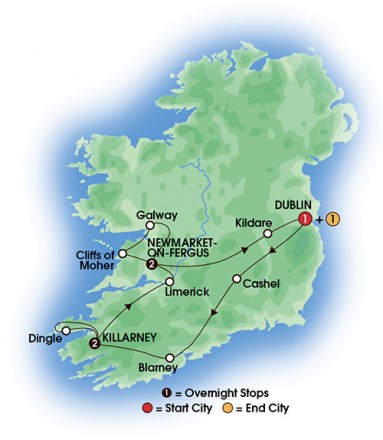 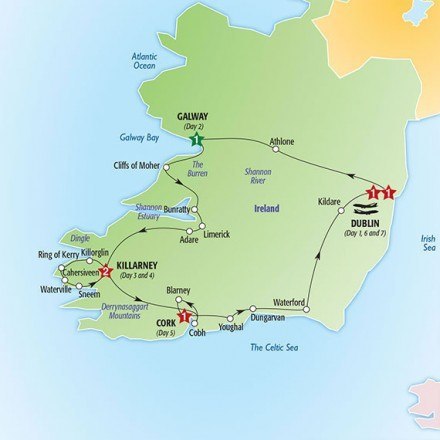 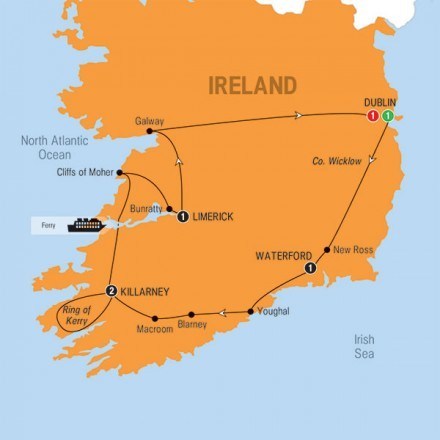